A Guide About SondaSYS SLS Technology 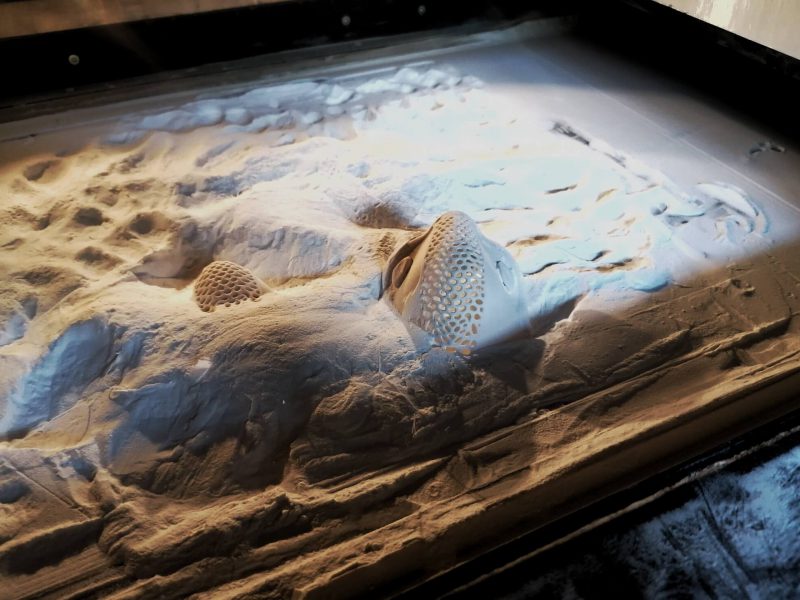 Selective laser sintering or SLS technology is one of the additive manufacturing (AM) technologies that uses a high-precision laser to sinter plastic powders including PA11, PA12, and PA6 into solid structures. The entire sintering process is based on specific 3D models.

For decades, SLS has become more beneficial and popular in the industry of rapid prototyping and manufacturing. SLS is an ideal process for running applications including functional prototyping and shot series manufacturing, mainly due to its low-cost parts yet high precision.

History
Selective laser sintering was one of the first additive manufacturing techniques in the SLS 3D printing industry. It was developed by Dr. Carl Deckard at the University of Texas at Austin in the mid-1980s. Since then, the SLS method has been applied to work with a wide selection of materials including ceramics, plastics, glass, metals, and various types of composite powders.

Today, plastic-based SLS and metal-based SLS are the two most popular powder bed fusion systems. These are also known as direct metal laser sintering (DMLS) or selective laser melting (SLM), respectively. Both systems prove to be complex and costly, which makes them an expensive option for rapid prototyping and manufacturing on a daily basis. However, SLS technology has become more common and available upon expiration of the patents. As a result, manufacturers started producing their own SLS devices, making them widely accessible for 3D printing companies all across the globe.

How SLS Technology Works
SLS 3D printers fuse small particles of polymer powder using high-power lasers. The lasers used differ per producer. While laser power is an important aspect, it is not the only option and is rarely used in its full capacity. Modern 3D SLS printers today consume between 40 to 100W of laser power.

The most vital requirements in this process are stable heating and accurate laser beam dots. Just like with any SLS 3D printing, an object printed with an SLS device starts as a computer-aided design (CAD) file, which are then converted to .STL format that can be read by any 3D printing machine.

Most objects printed from large 3D printers are made with plastic powder materials including nylon (PA11, PA12 and even high-temperature PA6), which are dispersed in a thin layer above the build platform inside the SLS machine. The laser is responsible for detecting what object or shape to sinter into the machine. It then works its way down the platform and traces a cross-section of the object onto the powder. The laser heats the powder either to just below its boiling point (sintering) or above its boiling point (melting), then fuses the particles in the powder together to create one solid form.

After each layer has been formed, the platform of the powder 3D printer goes down typically by less than 0.1mm to create a new layer that is ready to sinter and fuse together. The procedure is done repeatedly until the object is ready for printing. Once the object is finally formed, it is usually left to cool in the machine before being removed. On Sonda SYS SL02 devices, you can leave the objects to cool down and remove them after 1-2 hours, depending on their shape and size. Smaller-sized objects can be used almost immediately after.

In general, SLS requires very little extra tooling, which means the objects do not require as much sanding or altering once they are pumped out of the 3D SLS printer. SLS technology does not also need support to hold an object intact while being printed, which is usually the case when you are using 3DP methods including SLA and FDM. Overall, this makes printing on an SLS 3D printer more efficient.

Once the printing process is done, the objects are removed from the building chamber and separated to be dusted off from excess powder. This process is typically performed with the use of compressed air or media blaster and is done at cleaning stations.

It is of utmost importance that the selective laser sintering method possesses tight control and a high level of precision during the whole printing process. The powder temperature should be controlled within 2°C during the three stages of preheating, sintering, and storing, all before removing the full build parts – a process that minimizes warping, stresses, and heat-induced distortion.

Post-Processing
Once objects have been printed, SLS parts produce a slightly rough, grainy surface that mimics the texture of a medium grit sandpaper. To make them smoother, nylon provides a wide range of actions for an efficient post-processing. This allows you to perform tumbling, dyeing, painting, stove enameling, metal coating, bonding, powder coating, and flocking.

Minimal Material Losses
Once the printing process is done, the powder is filtered off from the building chamber to remove large particles, which can then be recycled for future use. Unfused powder experiences light degradation once exposed to high temperatures, but this can still be used once refreshed with new material for succeeding printing projects. Due to its reusable materials, the SLS technology is known as one of the least wasteful manufacturing methods in the SLS 3D printing industry.