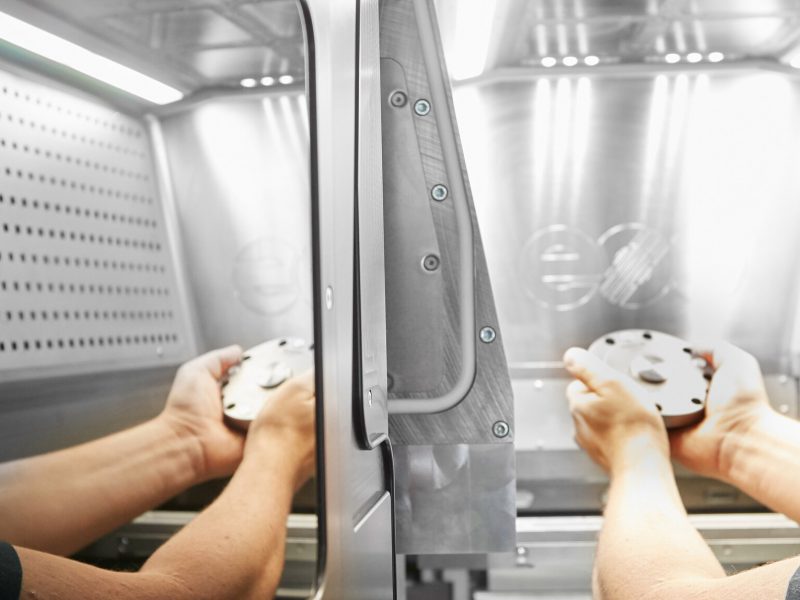 Our selective laser sintering system is currently the only 3DP device available on the global market that works with this technology and features an adjustable size building chamber. Two years after the Sonda SYS. SLS 3D printer made its debut, we have introduced an updated version.  All the upgrades we have made to the new device are the result of thorough testing on the Sonda SYS. by our R&D department based on feedback received from our users.
The biggest changes come in the convertible dimensions of the building chamber. In the new SL02 model of the high-resolution 3D printer, the chamber size can be adjusted from the smallest setting of 256 x 265 x 310 mm to the largest setting of 365 x 356 x 610 mm. So the net chamber dimensions that the unit will maximally accommodate is 360 x 360 x 600 mm.
Another exceptional improvement to the original unit is an even greater reduction of thermal losses, which comes as a result of the industrial 3D printer’s structural element replacement and the utilization of highly-specialized materials.

LASER
The laser is still-water cooled Synrad, with the SL 02 industrial 3D printer model that is equipped with 60W to 100W power variants.

230V INPUT
An additional power input has been added to the SLS 3D printer machine. The IP20 was originally installed in the electronics chamber for the service technician. Now, the rear of the unit includes an IP55 to power the chiller, making it easier to connect the high-resolution 3D printer to a power source.

PHYSICAL DIMENSIONS
By making the monitor sit flush with the cover shortens the SLS 3D printer’s depth by over 30 cm and its height by 10 cm. Currently, the external dimensions of the unit are 1985 mm x 1515 mm x 2160 mm.

CONTAINERS FOR THE BUILDING CHAMBER
In the new version 02 model of the industrial 3D printer, the building chamber containers are constructed of aluminum, where the original model had steel containers. The result is a lighter container that better delivers and dissipates heat.

CONTAINER CHAMBER HEATING
The SLS 3D printer from SONDA SYS. has two heaters, but in the new SL 02 model, the heat is handled much more efficiently. This is a result of the option to configure the power of the heaters: 1000w/per one, 1500W / per one, 2000W / per one.

BUILDING CHAMBER HEATING
With two infrared illuminators installed in the SLS 3D printing device, it has the capability of regulating the reflector’s power: 1000w /per one, 1500W/per one, and 2000W /per one.

The 3D SLS printer model SL 02 also features an automatic gas valve for the building chamber. We guarantee a thermal loss reduction and greater machine efficiency for thermal ventilation of the container chamber. This powder 3D printer also has an improved powder feeding system in both the scraper and the feeder, while using high-density screen insulation.